The Whale in the Living Room: A Wildlife Documentary Maker's Unique Vi 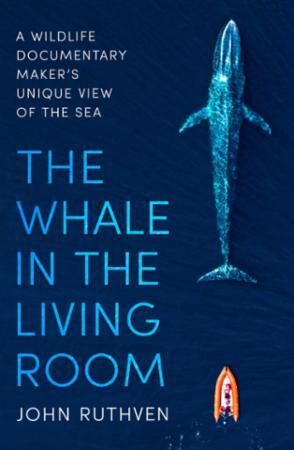 The Whale in the Living Room: A Wildlife Documentary Maker’s Unique Vi (John Ruthven): The Whale in the Living Room Room follows the thrilling adventures of BBC Blue Planet producer, John Ruthven, on a journey of discovery that helped the marine world flow into your living room via the TV.‘Two hundred miles off the coast of New Orleans, in the clear blue open sea, I’m starting to know what being in deep water means. My dive computer is going nuts, beeping an alarm in rapid descent. 43, 44, 45 metres, soon I’ll be deeper than a scuba diver on air can safely dive. I’m tumbling head over heels like an ostracod - one of the many strange creatures here that defy our imagination. It’s hard to say what’s up or down. I’m in freefall, an aquanaut lost in space.‘For many, the oceans are missing pieces in the story of life on Earth, and it doesn’t help that most are blue and form by far the biggest part of the jigsaw. Quite literally immersed in his subject, John can put them together, as the only producer to have worked full time on Blue Planet series I and II, and nearly fifty other films about the sea. With first- hand experience he feels the loneliness of whale calves in the blue, the fear as seals dodge great white sharks near the coast, or the curiosity of octopus staring back at the camera. His journey take us through the blue rings of South Pacific coral atolls, gives us submarine rides into the abyss with ancient life forms, and encounters so close with singing humpback whales that the water will bounce at the bottom of your virtual dive mask. Through each stunning adventure John draws out important insights into what is presently known about how the sea, and our whole blue planet works.What creatures could remain undiscovered in the 95 per cent of the seas that have not been thoroughly explored? The surface of Mars and Venus are better known to us than the seabed. Yet to map the world’s ocean to even 100-metre blocks of accuracy, something that environmentalists say is essential for its protection, could take a further 300 years. Even creatures that are known, such as the giant squid, have proved too hard to film to date. John has also been involved in the attempts to film this massive creature, using high-tech cameras deep in the abyss, with only the light of the moon for illumination. The thread of his story is to take us through such challenges of underwater imaging, as we develop ever better technology, to where no human has gone before, and see further than ever into the deep. The Whale in the Living Room, like the proverbial ’elephant in the room’, is also about how, until recently, we have been largely blind to our pollution of the seas. John, for example, explores how plastic ‘went wild’ in the ocean; tries to understand how we got into this mess; and see if we can ever untangle the oceans from its grip.In Blue Planet II the story John produced about a dead whale calf carried by its mother, likely killed by plastic residues, touched a nation. It ignited an already simmering public opinion into doing something about the plastic choking our seas. John was surprised to hear it being discussed in the UK parliament the day after broadcast. Such a depth of response, a connection and empathy with the sea, showed promise for real change. What creates moments like this? What makes people sit up and take notice at a certain point in history, when all along NGOs and scientists have been telling us the same thing, and the signs have been obvious? Is there hope for the ocean’s future?