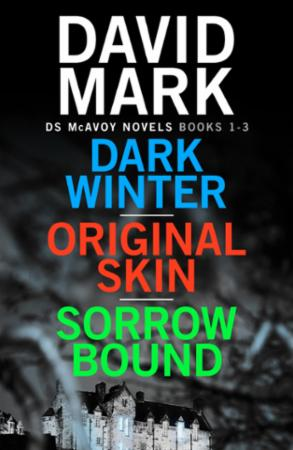 Dark Winter/Original Skin/Sorrow Bound: the first three books in the thrillingly (David Mark): THE FIRST THREE BOOKS IN THE SUNDAY TIMES BESTSELLING DS MCAVOY SERIES!Dark WinterDS Aector McAvoy is a man with a troubled past. His unwavering belief in justice has made him an outsider in the police force he serves, a good man among the lazy and corrupt.Then on a cold day in December he is the first cop on the scene when a young girl is killed in Hull’s historic church - and the only one to see the murderer. A masked man, with tears in his eyes…When two more seemingly unconnected people die, the police must work quickly. Only McAvoy can see the connection between the victims. A killer is playing God - and McAvoy must find a way to stop the deadly game.Original SkinSuzie Devlin lived for pleasure - until her best friend Simon was murdered. Now Suzie seems to be in the killer’s sights…Who wants her dead? And why? She’s done nothing wrong… except, perhaps, get involved with the wrong person.DS Aector McAvoy has been a marked man all his life. He knows how one misstep can put you in harm’s way. He’s determined to protect Suzie, even if it means inviting danger to come to him…In a dark world of sin and retribution, he will stand against a killer to save a life.Sorrow BoundPhilippa Longman did what we all aim to do. She did the right thing.She’s about to pay for it with her life…DS McAvoy has spent his career playing by the rules. He has the scars to show for it.And his latest case will take him into a world in which good intentions make no difference to those with a thirst for revenge… Where ruthless killers go to any lengths to get their way… And where the most powerful thing anyone can do is stand firm against the darkness.