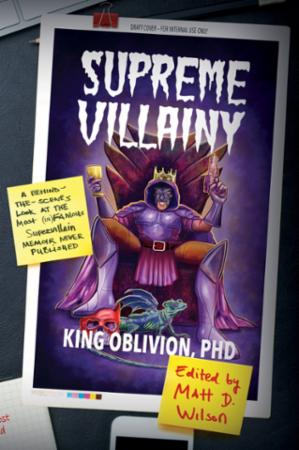 Supreme Villainy (King Oblivion): For eons, King Oblivion, Ph.D., was one of the most ruthless supervillains the world has ever known. As the CEO of the ISS (International Society of Supervillains) for half a century, he was personally responsible for numerous nefarious acts, including Nixon’s presidential election, stealing the country of Japan, Star Wars: Episode I-III, and Milli Vanilli, just to name a few. Since his untimely (and inexplicable) passing, Matt D. Wilson, who was found rotting in one of Oblivion’s numerous dungeons, has discovered in his giant lair (located in the Earth’s mantle) what seems to be the early workings of the villain’s ultimate manifesto. Though in-depth research (and paper cuts), Wilson reviewed endless documents and has compiled numerous unedited chapters, email correspondences, and various threats which combine tell the “life story” of this anti-hero.Supreme Villainy is an intimate look into the mastermind who once ruled the globe with an iron fist (and ray gun). For the first time ever, readers will learn of his birth (which has never been noted on record), rise to power, and domination of the world as we know it today. Revealed inside are never-before-seen notes, illustrations, and personal letters which, now collected, show a glimpse into the once-infamous villain’s uncompleted manuscript, and maybe a hint into who the real man was behind that horrible mask.